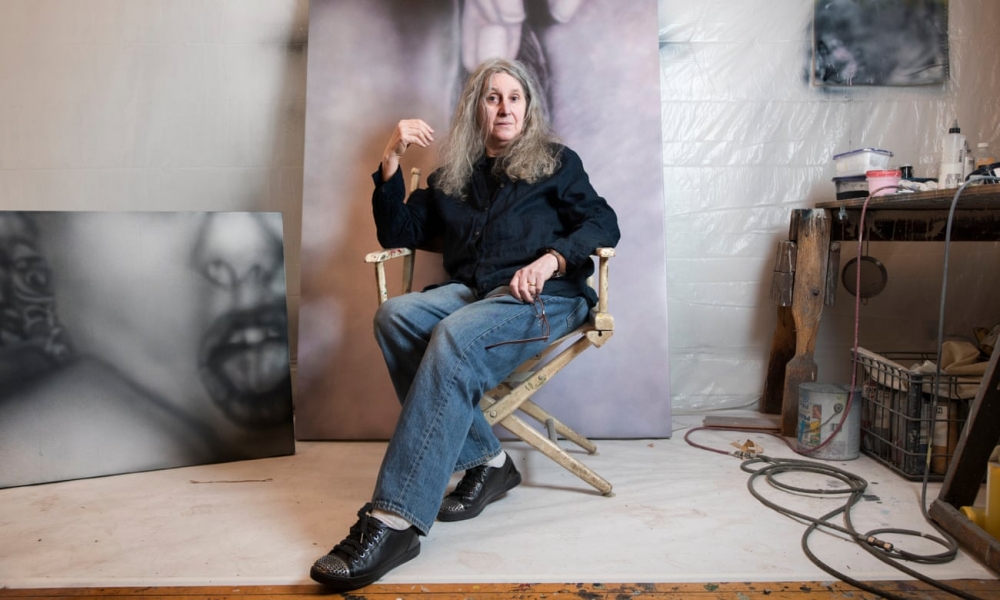 Betty Tompkins sits slumped in her chair, knees wide apart, cheerfully reading from the phone in her hand with an attitude of scoffing amusement: “‘The venerable’, ‘the brilliant’, ‘the incomparable’, ‘the great living legend’ … ” She breaks off to frown and mutter: “How old am I?” Then she continues: “‘The famous and infamous’, ‘inimitable’, ‘iconic’, ‘pioneering’, ‘mega artist’, ‘the fabulous’, ‘coolest old lady artist did not come to play.’” She looks up, grins and says: “I’ve been collecting these.”

In the last year or two, Tompkins must have been written about more than she has in all the preceding decades put together. After half a century of being ignored, who can deny a woman her adjective collection? We’re in the 74-year-old’s New York studio, a crammed and agreeably shabby loft in SoHo that she bought back in the 1970s for the unthinkable sum of $20,000, long before Prada flagships and Apple stores claimed this enclave of Manhattan.

Down below us, Prince Street is shiny with antiseptic wealth. Up here, the walls are rich with filth. A large canvas of a vulva leans against the wall beside us. I look at the work. It’s curiously restful, a faint lilac glow lighting its gradations of grey. This is the sort of piece for which Tompkins is most famous: realistic, large-scale images of genitals and penetrative sex – unsubtle images painted with great subtlety.

Tompkins’ paintings are often described as “photorealist”. Yet she says: “My work compared to an actual photorealist is lame. They’re interested in getting everything. I’m interested in getting just enough.” She made the first of her Fuck Paintings straight out of grad school in 1969, a time when almost every female artist was ignored, whatever she was making. As for a young woman making enormous paintings of penises: “Nobody wanted to have anything to do with them or me.”

Hanging by the door are three reproductions of the same photograph showing young Tompkins with her thumb hooked in the pocket of her flares, looking insouciant between two giant dicks – her own creations, both towering over her. In the 1970s, she’d leave copies of this photograph with prospective galleries as a calling card, wanting them to appreciate how big her paintings were. Why did size feel so important? I’m half-expecting some caustic and vaguely Freudian response, but she shrugs and says: “Oh, it was the time. Painting was big. Contemporary painting meant large. That was it.” She adds: “I was very ambitious. Absolutely. Was I naive? Twenty-four and just out of school – I’d say so.”

School was Syracuse University where, like everywhere else in 1960s America, abstract expressionism reigned. So too did misogyny. “When I was in college,” Tompkins recalls with some pride, “this one guy used to say, ‘With her, you never know if you’re going to get a ‘fuck you’ or a chicken dinner.” She rejected the sexism, but she didn’t entirely reject abstract expressionism. Few of her professors, however, would have expected her to apply its tenets to pornography.

One day, Tompkins began tearing up and repositioning this hard-won, softcore material, excited by its visual possibilities. “I had never actually looked at them as compositions, as images,” she says. It was a revelation. “I said, ‘This is what I’ve been looking for all along! A beautiful, abstract image.” Because, she enthuses, “if you get rid of the hands, the feet, the heads, anything miscellaneous, go to the money shot – abstractly, it’s gorgeous, it has charge. I looked at it and I said, ‘That would make an unbelievably great painting.’ The next day I started Fuck Painting #1.”

Nonetheless, figurative balls are still recognisably balls. Isn’t there something a little disingenuous about making a claim here for pure form? “I didn’t do them to be provocative,” she says. “To me, ‘charge’ does not mean provocative. To me, provocative is something you’re deliberately doing to other people. I wanted to do paintings that I wanted to look at in a gallery. I did want people to stand there long enough to see what I was doing. For that, you have to get their attention somehow.”

Tompkins belongs to a cohort of older female artists who now find themselves championed by a new, millennial audience for whom sex-positivity is an orthodoxy, rather than the feminist heresy it once was. Among them is Tompkins’ buddy Marilyn Minter, who makes images that seem to drip and be smeared with bodily fluids. Slick lips and tongues abound. Last year, 71-year-old Minter’s mainstream anointment was confirmed when she shot Lady Gaga for a New York Times magazine cover story.

Like Tompkins, Minter has used pornography as both a source of inspiration and an instrument of subversion. But she says: “Betty did it 20 years before me. We were taking an abusive history and repurposing it.” Once they were shunned. Now, says Minter, “We’re always trotted out for panels – because young women are rediscovering the transgressiveness of all of us old dames. Millennials are a lot more open, the most refreshing group that ever emerged anywhere, and that’s what’s upsetting all these old farts. My generation has to die the fuck off, basically. This is the old era gasping its last gasp.”

These guys who are accused of sexual misconduct – they talk too much, they go on and on

Those last gasps are particularly audible as a response to the #MeToo movement. For Tompkins, this paradigm shift has been exciting. “Such bravery on so many women’s parts. It seems to be really catching and not dying. I hope they feel that my work supports them.”

In her longstanding Women Words project, Tompkins overlays reproductions of paintings with words and phrases related to women, some misogynistic, some affectionate, all crowdsourced from mass emails. More recently, she worked on a related series called Apologia, based on the mea culpae of well-known men accused of sexual misconduct. The series sees her reproducing famous paintings and replacing the outlines of bodies with words, this time those of the accused men, painted in millennial pink.

Here for example, is Artemisia Gentileschi’s Judith Slaying Holofernes, with the body of the slain general made up of the words of US painter Chuck Close, who was accused of sexual misconduct, making vulgar comments to women, in January last year. “The other thing about these guys,” she says, growing expansive. “They talk too much. Seriously. They go on and on and on. I have to edit like a motherfucker. They can’t just say, ‘I’ve been forced to resign because I’ve been a bad boy and don’t know where to keep my hands.’”

Such condescension makes pets out of older women. And, in Tompkins’ case, all the “yas queen” cheerleading in the “coolest old lady artist” vein puts the artist and her age before the art itself. Then again, if it means your work is finally appreciated, would you really care all that much?

View More
Back To Top